Month of Makeovers: The Aftermath with Kitchen Update

The last few days in This Old Row House have been more eventful than I ever wanted.

Verizon shipped out a new modem yesterday–yea!–but the DSL is still bad and keeps dropping the connection. It gets an “F” at speedtest.net.  90% of the planet’s inhabitants have a better internet connection. It must be time to upgrade to FIOS.

A new, huge Samsung fridge is now overfilling its space in the kitchen. We had to rip out the cabinet over the old fridge to make room for its extra dimensions. These “custom made” cabinets were installed by the previous owner of the house, probably back in the 1970s. The “craftsman” who built them didn’t own a T-square or a level. 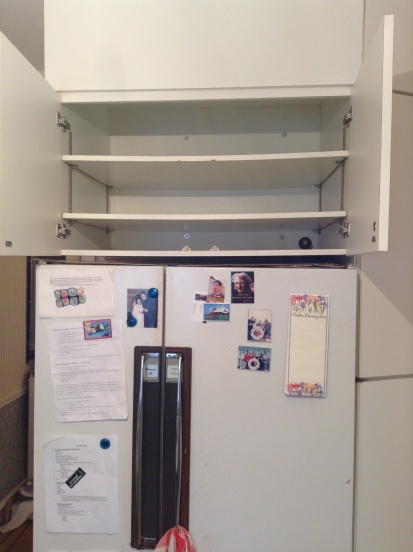 I am so thankful for a dear friend’s husband who dropped his own house painting project to come over to do this! He sliced off about five inches of fake front right there on the kitchen floor.

A lot of wedging with scrap boards, drilling new holes, and refastening with new screws followed. He also cut down the adjoining soffit to match. (Yep, we need to clean off all the old glue.) He made it home in time for dinner. And when the new fridge arrived yesterday it fit! Mostly. It will look better after a bit of adjusting–a new three-prong outlet for the plug would help us move it back a couple inches. It’s not as wide as it looks. It actually sticks out in the front, not to the side. 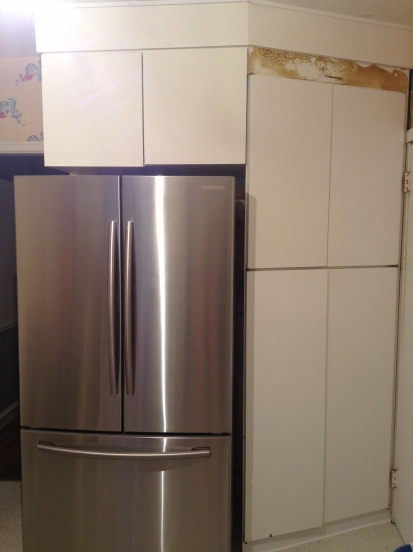 So what did I get out of Month of Makeovers besides an unplanned kitchen project?

I realized that I don’t just want to make things for the sake of making things. I was planning to make a lampshade out of pulp fiction bookcovers, but I don’t have a place to put another lamp. It would have been really cool but useless. Several other of my planned projects got eliminated for the same reason. I don’t need more stuff cluttering up my house.

I discovered piles of wonderful fabric I had forgotten about. Barkcloth. Vintage velvet. 1950s atomic prints. So many possibilities! So little time!

I had loads of fun creating things. It’s been way too long since I’ve done anything but paint furniture or walls. I relished the sheer fun of inventing something new and then making it real.

I admitted that all my stuff is disorganized and I hate it. I’ve already started putting materials, tools and other supplies where I can find them when I want them. It’s so much easier to make something when you can find your hammer or rotary cutter or needle nose pliers. 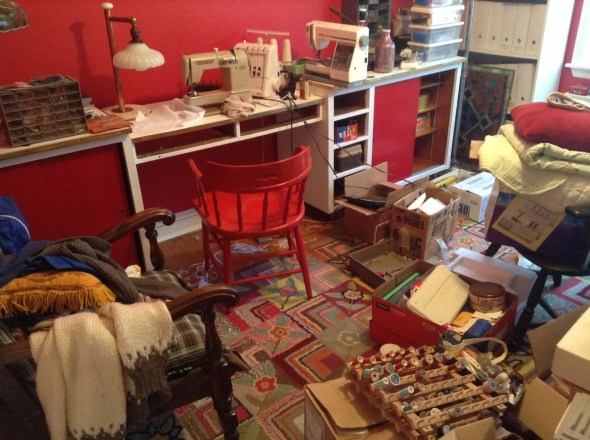 I can’t even think, much less work, in this disaster area. This will be my next makeover project along with overhauling the 10′ x 10′ overstuffed storage space in the basement. You don’t get to see how bad that is today.

I’ve only got a few weeks before the holiday season kicks off.  How much can I get done in November? Stay tuned!