Posted: January 3, 2014 | Author: luray | Filed under: Fun Finds, Lurayville | Tags: Antiques and Collectibles, vintage oil painting, what to put on the wall |Comments Off on Snow day with non-exploding art 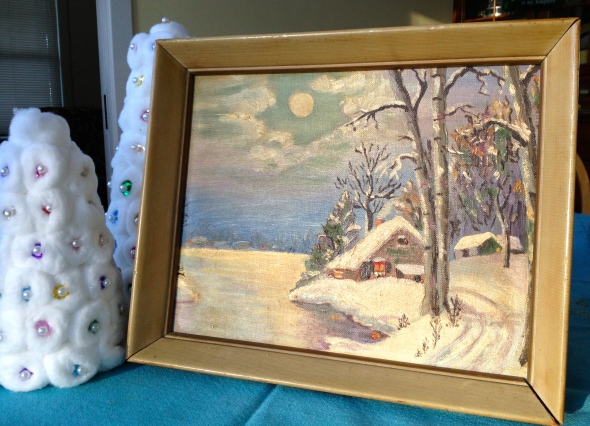 And three degrees Farenheit right now. We’re snug in the house, wearing extra sweaters, watching Cary Grant movies, and plotting what to do with the rest of the weekend.

I’m thinking about where to hang this sweet little oil painting I found last weekend on that epic thrifting trip with Janeray.

It looks like tonight’s snowy landscape. That is, if we lived in a little story-and-a-half cape with a barn out back, next to a large frozen lake. Which we don’t. But the huge drifts of snow part, yep, we’ve got that.

I know diddly-squat about fine art, so I’m not sure whether this is an original painting, or one of those prints on canvas that’s been artistically touched up by hand. It’s not signed. Anybody with better understanding want to hazard a guess? 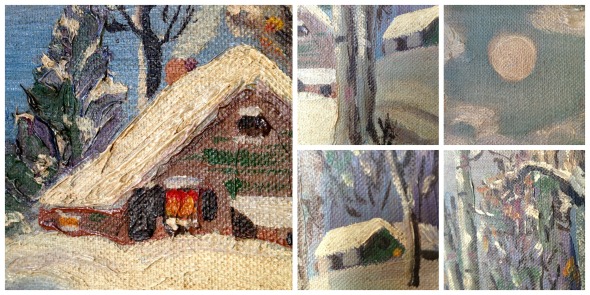 Original or not, I like it. Although that brightly lit door? window? escape hatch? concerns me. Has a gunpowder experiment gone awry? Has Hansel just shoved the wicked witch into her own oven? What’s going on?

None of the other windows are blazing, though, so apparently the conflagration is contained. Unlike those artsy “cottage” paintings in which all the windows glow vividly, as though the residents have installed 1,000-watt bulbs in every light fixture, or maybe Johnny the boy genius just detonated the miniature neutron bomb he built with the chemistry set he got for Christmas.

Anyway. We’ve got a sliver of a silver moon tonight, not a full one like in the painting. All is calm, all is bright.