Yesterday I planned to take pictures of my souvenir pillowcases to list on Etsy. I had time. I had lots of indirect, natural light. And I have a pile of pillowcases. 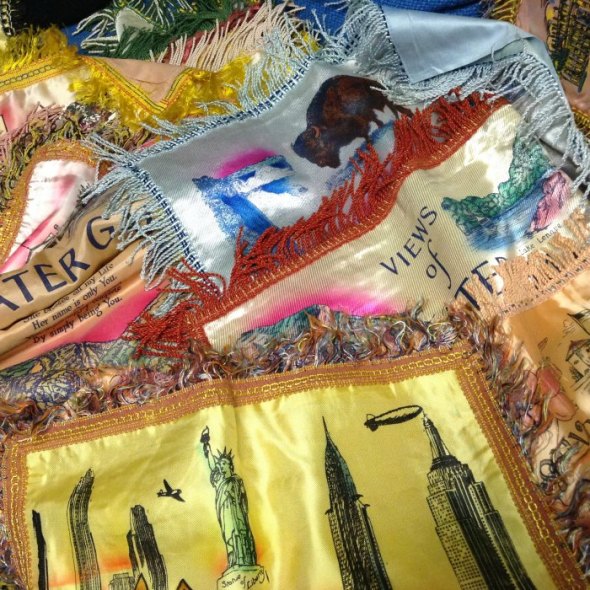 The very first souvenir pillowcase I bought was from Niagara Cave in Harmony, MN. I’ve never been there. I just loved the slightly gaudy colors and detailed graphics. They reminded me hand-colored pictures on linen postcards from the same era (1930 to 1945). (Yes, I have a pile of postcards, too!) 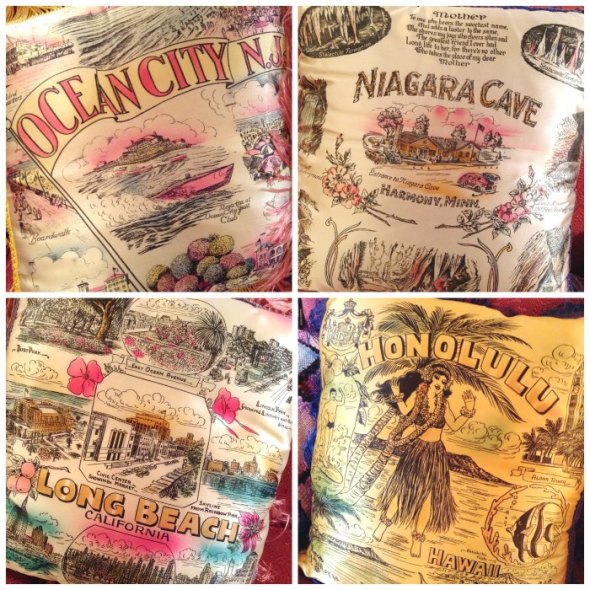 I have a few favorites, starting with a very heavy satin pillowcase from the Grand View Point Hotel. Also known as the Ship Hotel, this landmark sat on the Lincoln Highway (Rt. 30) in the mountains of Pennsylvania. It was THE place to go before the Turnpike was built and traffic dwindled. Sadly, it burnt to the ground 2001. I’m glad I got to go there and take photos before it disappeared. 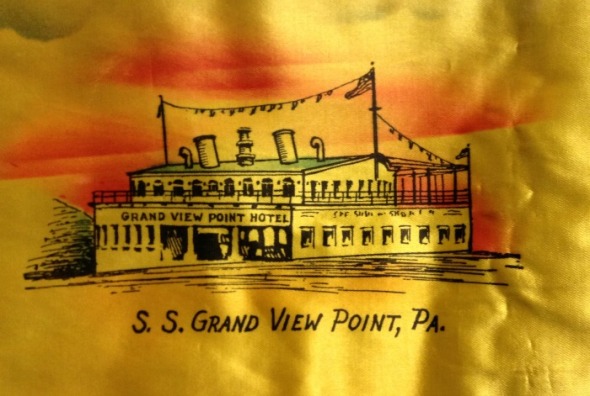 I also really like a trio of pillowcases from New York City. One has a fancifully colored Lady Liberty flanked by roses and two landmark skyscrapers, the Empire State Building and the RCA Building at Rockefeller Center. The big pink lettering is fantastic! The buildings date from 1931 and 1933 so this pillowcase has to be newer than that. 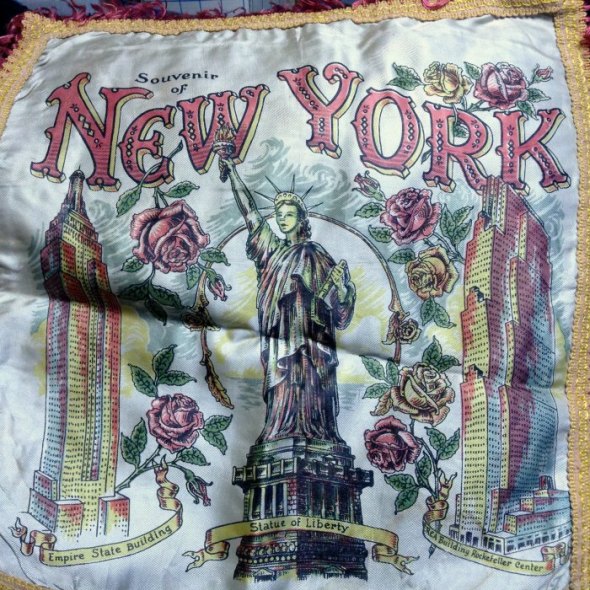 An older New York City pillowcase has only the Metropolitan and Woolworth buildings. I’m guessing the graphics date to the very early 1930s, but the pillowcase doesn’t have to be that old. 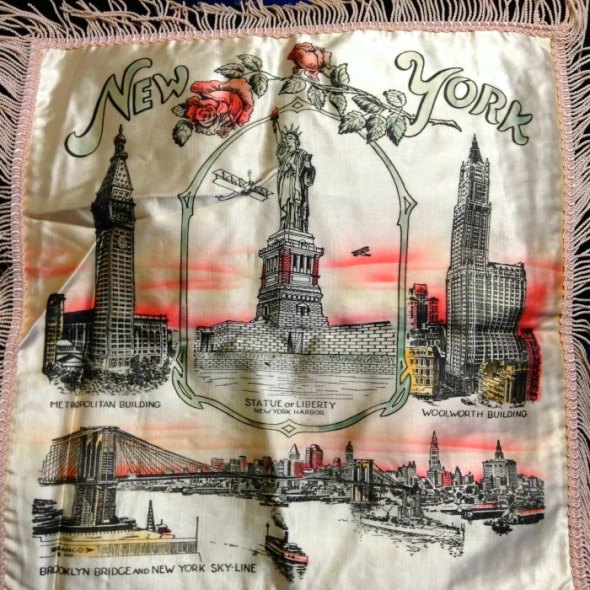 I like the biplanes soaring in a rosy pink sunset! 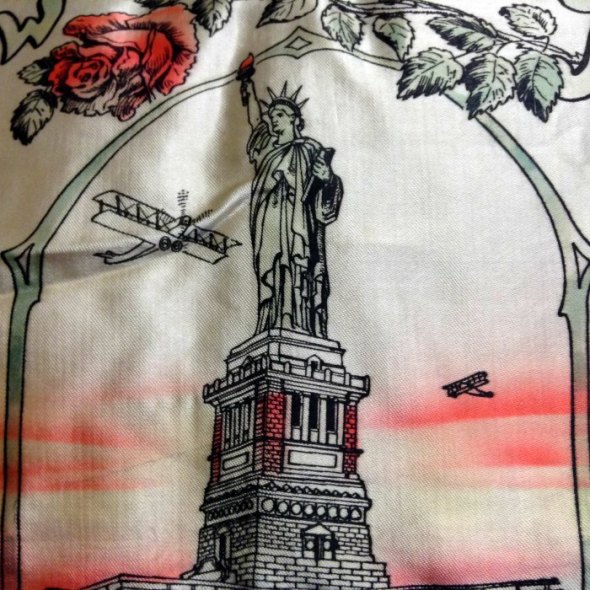 I can date a third New York City pillowcase exactly. 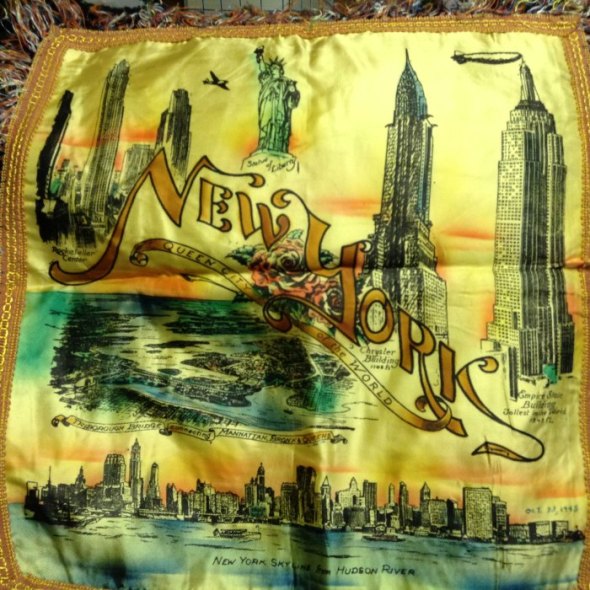 The original owner wrote “Oct.23, 1948” on it using a fountain pen. I’m also intrigued that it pictures a dirigible docked to the top of the Empire State Building. Airships never docked there, but a famous 1930s photo was doctored to make it look like they did. Just imagine disembarking across a swaying gangplank at 1250+ feet. On a windy day. Are you queasy yet?

My final favorite is so bad it’s good. The slightly lurid colors seem more 1960s than 1940s to me. A souvenir of Seattle, it has the ugliest portrait ever of Chief Seattle. 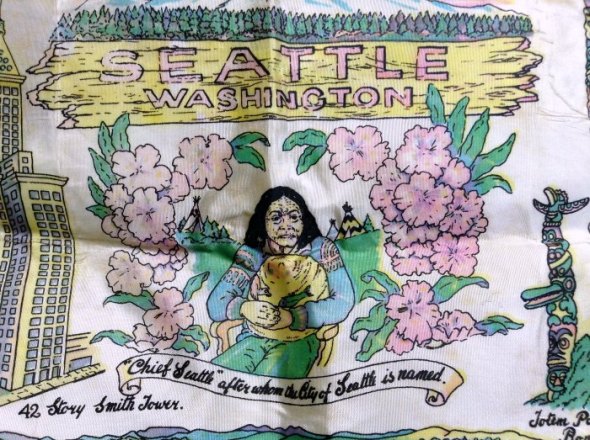 The poor man looks even worse as you get closer. And what’s that lump with fish he’s holding? A basket? A blanket? Anyone know? 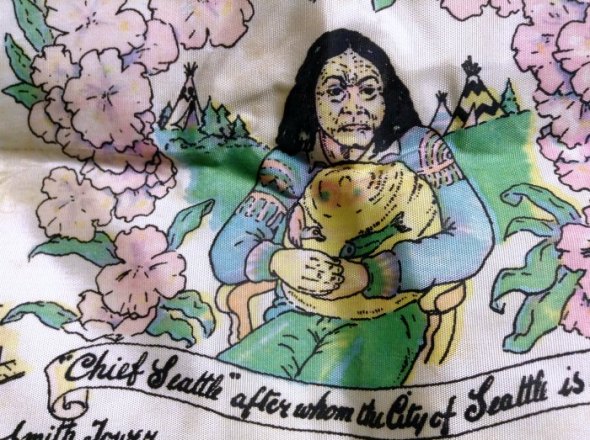 So now I know how hard it is to take a good photo for Etsy! I need better light. I need to get out my iron and press out all the wrinkles. And I need to stop falling back in love with my souvenir pillowcases or I’ll NEVER get them listed!

Linking in with Vintage Thingie Thursday!