← How I ruined–and revived– my Bakelite flatware handles, part 2
Remedy for the winter blahs →

How I ruined–and revived– my Bakelite* flatware handles, part 1

It only took a split second to ruin all of my Bakelite* handled spoons. In a moment of utter stupidity I dropped them in a sink full of hot, soapy water. And THIS is what happened. WAH! 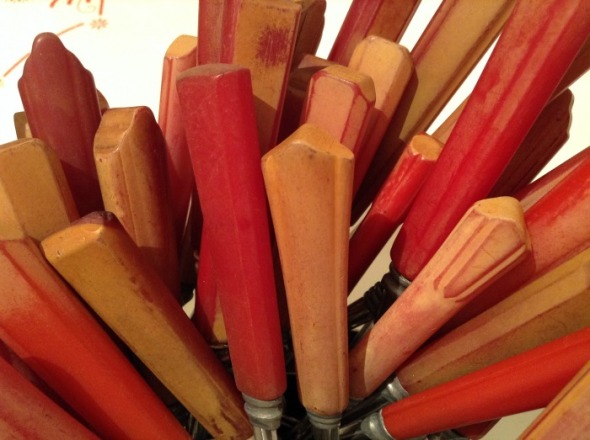 They’re now almost entirely oxidized. Fortunately for you, my slip of sanity will work for your benefit. Because now I have to restore them. And I’m going to try most of the suggested remedies I’ve found on the web to see what really works. I’ll even try some solutions that I’ve never seen mentioned anywhere but work pretty well.

The most popular solution on the web seems to be

Simichrome. This German metal polish has earned a reputation on eBay as the defining tester for true Bakelite. A dab of this pink polish turns brownish-yellow when rubbed on Catalin/Bakelite. That’s because it removes the brownish-yellow oxidation. I happen to have a tube on hand because it’s my favorite silver polish.

I had to use a pretty big blob of Simichrome–about three times as much as I’d use on a piece of silver. I used a swatch of old bath towel and had to rub fairly hard. I should have worn gloves because Simichrome is a skin and eye irritant. The finished result is a glossy shine and a strong chemical smell which has dissipated by the next day. The spoon looks great. Yet I’m just a bit hesitant about using Simichrome on eating utensils. I wouldn’t have a problem using it on jewelry or other Bakelite objects.

Next I tried plain old canola oil. I’ve never read about this cleaning solution anywhere, but I’ve been using it for years to shine up my Catalin pieces.

A dab of Canola oil on a paper towel combined with some rubbing will take all the oxidation off a piece that isn’t too bad to start with. The two spoons in the photo above were equally oxidized before I rubbed out the top spoon with oil. It doesn’t take any more elbow grease than Simichrome, but it’s non-toxic. And edible. It leaves a nice shine when buffed and no nasty smell.

So if cooking oil works, what about beeswax? I had a jar of Clapham’s Beeswax Polish so I gave it a try.

Initially it seems to remove the oxidation quickly and it has a lovely lavender smell. But the results wear off as soon as the polish dries. The finished pieces ended up looking almost as bad as before I started. I’ll save the Clapham’s polish for furniture.

Oddly enough, just like cooking oil it works on oxidation that isn’t too severe. It took pretty big blob. It was messier than anything else so far and left the spoon handle smelling like peanut butter. It also made me want to get out a box of crackers and forget the whole experiment.

I’ve got more remedies to try, but I’ll save them for Part Two. In the meantime, keep your Catalin/Bakelite out of hot water! And let me know if you’ve got a cleaning suggestion. I still have a pile of oxidized spoons to restore.

3 Comments on “How I ruined–and revived– my Bakelite* flatware handles, part 1”